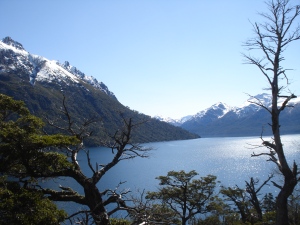 Better than the Swiss Alps. Thats what they (the Argentines) say about Bariloche and San Martin de los Andes. Well, I’ve never seen the Alps, and these Argentines do have a tendency to be extremely proud of everything Argentino, but this time it might not be a far stretch. To risk sounding cliche, the snow-peaked mountains, mired in the bluest lakes and all backed amazingly clear skies made it absolutely breath-taking.

It was well worth the 23 hour bus ride, (alone…lots of good thinking time, not nearly as hard as one might think) each way. I first spent two days with a friend from school, Sol, in San Martin de Los Andes and from went on my own to Bariloche. I was really struggling in that moment, traveling by myself feeling really lonely, that I almost didnt go at all and just went back to Buenos Aires. But i’m so glad i didnt.  You know those kids of people you meet, and within the first little while youre alternatively joking or then having those deep life conversations as if you had known them your entire life? Well, i met a couple of those people.

Or maybe Picasso was completely right when he said “I don’t believe in accidents. There are only encounters in history. There are no accidents.” Because in that moment, it was so much exactly what I needed. Although I really love Buenos Aires and have had numerous great experiences, I havent been able to really make so many of the real connections with people that I so much crave. Just people you can spend hours and hours with, and just enjoy their company. Here’s some of my thoughts I wrote in my journal on the way back to BA:

“So we go to dinner, where Paco (this guy i randomly shared a cab with from the bus station) introduces me to his two friends from the hostel, Juan from Colombia and Jose from Barcelona. Then they invite me to hiking with them the next day. And over the course of the next couple days the three of us become a little team, and just have so much fun together.

The first day we were supposed to hike to the top of Cerro Cathedral, and I knew it was going to be all snow covered, but thats where they are skiing, and all i had were there thin little sneakers, so i put on two layers of plastic bags under my socks…feeling pretty paranoid about hypothermia. but juan from colombia was even worse prepared than me and didnt even have a proper coat. needless to say we wandered around for a bit in the snow, but didnt make it anywhere near the top.

Juan had never see snow fall before (yes it was snowing – in September) and i was just trying to joke around and threw a snowball at him (figuring he needs the full cultural snow experience, right?) – and without at all meaning to, hit him squarely in the face sending his glasses flying to the ground! ha he was a good sport about it, but for the rest of the week they joked about how american culture is all violence.

Which is really how the rest of the couple days went, making fun of the stereotypes of each others cultures (the Spanish guy was honestly shocked to hear that Americans generally associate their lispy way of talking as being gay, ha!) and finding some many common points, despite such wide backgrounds.

The next day Jose and I met a girl from Isreal, Keren and we all went hiking along the famous Circuito Chiquito.  As walked along, Keren told us all about Isreal-Palastinian relations – with a definite slant.And just incredible views all along.Then we found this dog,just followed us along

for a couple hours, like he was our guide. And we named him “Little” and tried to make him pick a favorite by calling him back and forth between us, and then joking that he was “easy”… ha

But it was in the end of that day, which had already been so full of stunning views and good conversation,  right before sunset that i lived one of those  instants where you find yourself at almost perfect peace. We were all (including Little) sitting on a narrow ledge, overlooking a deep blue lake down below, completely surrounded by high mountains which one hand so solidly planted to the earth, while at the same time were stretching upwards into the sky, with all the snow at the top reflecting pink from the fading sun. There was no sound, except for the wind sliding through the trees.  And you just held your breath at the absolute majesty of it all. It was one of those very rare moments you just wish you could stuff into a bottle for the future and take a sip whenever you need a taste of absolute happiness.