I feel that I’ve had the amazing blessing of getting to travel a good deal and see some very beautiful places. But now it takes something really stand out to leave me amazed. The Salar de Uyuni (Salt Flats of Uyuni) did just that.

Some 16,000 square meters of land, covered with 6 cm to 3m of pure salt. Salt so pure that its simply dried and sold as is, without any sort of purification process or anything. Just pure natural salt. For miles. Literally extending to the horizon.

In the rainy season, this is all covered with several inches of water, making the world’s largest mirror. The effect is just stunning. The foreground just blends seamlessly into the far distance. So all sense of perspective is lost, making for some pretty funny pictures.

From there we took a three day jeep tour which took us through some of the most bizarre, yet striking landscapes. First, however, it was Pachamama Day.  In the traditional religions of Bolivia, the Pachamama is essentially mother earth, except that they take it very seriously. For example, when the government passes laws protecting the environment, they talk about about protecting the Pachamama and actually write that into the law. So, before heading out all the tour jeeps were decorated with flowers and balloons and streamers.

Then, as an offering for safe travels, the driver sprayed down the car with beer. And we all had a cup (despite being 8am) but had to pour some out on the ground to appease the goddess.

From there, our first stop was Valle de las Piedras, or Valle of the Rocks. Pretty aptly named, given that it was really just a valley filled with rocks with crazy formations. It was a visual playground.  The sort of place you just have to wonder, ‘how did this get here?’ 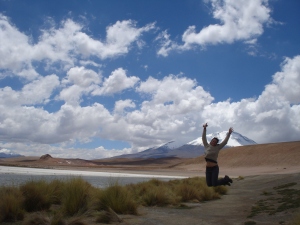 The next few stops were a variety of lagoons, which strangely break through the dry cracked earth after traveling through hours and hours of desert. They are fed by underground steams, but lack any real vegetation because they are highly sulfuric.

The most beautiful is the Laguna Colorado (Colored Lagoon), which gets its color from carnitine, the same stuff that colors carrots and tomatoes! Even stranger is that it is the breed grounds for over 55,000 flamingos!  So in the middle of the high desert, are sulfuric lagoons, filled with pink flamingos, and in the background are the snow-peaked Andes.

As we traveled through the deserts, we would frequently see llamas roaming the hills. They arent exactly wild, but the herders let them graze freely and just gather them when its time to shear the wool. And once a year on Pachamama day for a ceremony of protection. We got really lucky to be just in the right place to see it. They put these pink tassels on the ears of each llama to ask the Pachamama to watch over them. This done with lots of burning incense, drumming, dancing, chanting, and apparently a good bit of drinking to top it all off.